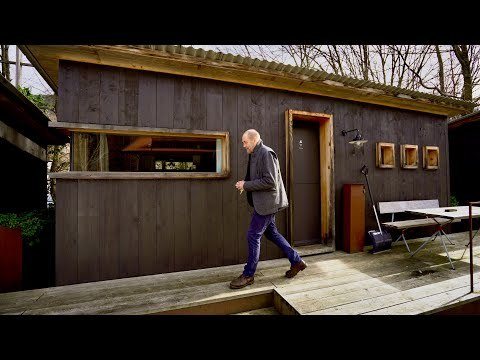 In the tiny Bavarian town of Aschau im Chiemgau, Nils Holger Moormann and his 35 employees create modern furniture in a converted stable under the shadow of a 12th century castle. All designs are produced within 40 kilometers of their rural headquarters, or as avid cyclist Moormann explains, “within a two hour bike ride”.

Moorman initially studied law – encouraged by his father- but when began exploring furniture design and found his passion, and early success. The furniture are contemporary classics, but his creative world takes place inside the remains of past centuries. Moorman’s complex of creativity includes the huge stable turned workshop where they prototype, and even test, the designs. There’s the barn that is now his home and most recently, he converted another rundown structure into a guesthouse where not only are the furnishings minimal, but guests are encouraged to disconnect with the Internet-free policy.